Our story begins with our grandfather, Seiichi Toguchi (1914–1994). He was born in Hawai‘i, but was raised in Ginoza-son, Okinawa. He returned to Hawai‘i in 1928, and at the age of 14, he began working as a dishwasher at the old City Café, where he met our grandmother, Nancy Toguchi (1914–1975). Fueled by a strong desire to improve his life, our grandfather learned how to cook Hawaiian food and was quickly promoted to cook’s apprentice.

After the outbreak of World War II in 1941, my grandparents and their three children were taken from their home and interned in Jerome, Arkansas, and Tulelake, California. Working in the mess halls of the Japanese Internment Camps, our grandfather mastered his culinary skills and began to perfect his American recipes. At the end of 1946, the Toguchi family returned to Hawai‘i and our grandfather worked hard to regain some financial stability. Despite several failed attempts to earn an income to support his growing family, he eventually settled on an idea that stemmed from a very simple and practical view: put food on the table to feed his seven children.

In September 1947, our grandparents opened the original Highway Inn on Farrington Highway. Soon after, they had a line of people standing outside of their modest store. Then in 1960, we moved to the heart of Waipahu on Depot Road, just below the old Waipahu Sugar Mill. Our Depot Road location continued to attract the appetites of west side families, and then under the ownership of our father, Bobby, the restaurant moved to its current location on Leoku Street in 1984.

In an effort to offer our customers more of the food they love, we opened Highway Inn Seafood Market in 2000, which now serves over 20 varieties of poke. We also began Highway Inn Catering and Events, so our customers can enjoy the taste of Highway Inn at all of their island events, including baby luau, graduation parties and corporate functions. In 2013 Highway Inn opened its 2nd location in Kaka‘ako, an area of downtown Honolulu which for decades was home to Salt Ponds and agriculture, then became the city’s urban core, and nowadays is a rejuvenating neighborhood where condo towers, bespoke retail outlets and bohemian restaurants are popping up for business. Now in our third generation of family ownership, we are happy to carry on our grandparents’ tradition of serving “A Taste of Old Hawai‘i.” We look forward to your next visit. 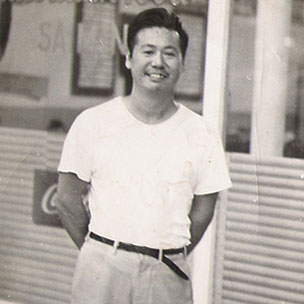 Seiichi Toguchi outside of our first restaurant on Farrington Highway.