Get To Know Hawaiian Food With The Malihini Guide©

One of the best restaurants in Hawai‘i, we’ve been making Hawaiian food since 1947. Our traditional Hawaiian cuisine is delicious, distinctive and rich in history as well as taste. This Malihini (newcomer) Guide will help you appreciate the traditional flavor of our Hawaiian food.

AHI | ah-hee | Hawaiian for yellowfin tuna and not screamed when surfing on the North Shore. Here at Highway Inn, there’s a choice of fresh or previously frozen ahi, served in a variety of Hawaiian style ways.

BEEF STEW | beef stoo | A top selling item, our Hawaiian beef stew is different than traditional American stew. Each order is slow cooked one pot at a time until our flavorful tomato base makes each morsel of beef extra tender.

BUTTERFISH STEW N’ GRAVY | butt-tah feesh an gray-vee | Salted butterfish (black cod) boiled and smothered in our Hawaiian stew. It’s served grilled, plain or in hot water with green onions. Don’t you wish this was in front of you?

CHICKEN LONG RICE | chi-ken lah-ng rye-s | Made of Chinese vermicelli noodles, chicken, broth, ginger, garlic and green onions, this dish is a Hawaiian luau staple since the mid-1800s. One taste and you’ll know why.

CHILI PEPPER WATER | chee-lee peh-pa wad-dah | A popular condiment prepared from local red chilis, salt, and water. It’s good on most everything, but not the table, floor, or your friend. So please don’t shake the bottle when dining here.

HAWAIIAN SALT | ha-why-in sahl-t | Or Alaea Sea Salt is a traditional Hawaiian table salt. Historically, it was to preserve foods, which is why much of Hawaiian cuisine is seasoned with it.

HAUPIA | how-pee-ah | A sweet Hawaiian dessert. It’s a cross between coconut pudding and Jello®. Traditionally made of arrowroot (pia), haupia is now made of coconut milk, cornstarch and sugar. It’s a great way to finish a meal as well as start a meal.

KĀLUA PIG | kah-loo-ah peeg | Literally means, “pig cooked in an underground oven.” It’s the centerpiece to Hawaiian lū‘aus (party) and was traditionally slowed cooked in an imu (underground oven). It’s similar to carnitas, but has a smokier flavor.

LAU LAU | like wow-wow, but with an “L” | A traditional Hawaiian food consisting of a piece of pork and butterfish wrapped in lū‘au (loo-ow) leaves (think spinach) and steamed for several hours.

LIMU | lee-moo | Hawaiian for seaweed, it added a savory flavor to the ancient Hawaiian diet. Today, we use it in the same way. You’ll find it in our fresh ahi poke (poh-kay) as well as in our delicious poke bowls.

LOMI SALMON | low-me sam-min | A Hawaiian side dish made of diced tomatoes, onions and salmon. Similar to ceviche, lomi salmon’s culinary partner in crime is poi. This dish is on the saltier side as a result of the salted salmon’s introduction by whalers in the early 19th century.

NA‘AU PUA‘A | nah-ow poo-ah-ah | A Fear Factor dish. It’s chitterlings (pig intestines) and lū‘au leaves in a soupy base. The literal translation is gut (na‘au) of the pig (pua‘a). It’s on the saltier side, and easier to eat than to pronounce.

PIPIKAULA | pee-pee-cow-lah | Our most popular dish, pipikaula was a favorite snack among paniolos (Hawaiian cowboys) during long cattle drives in the 19th century. A salted, dried beef strip, some liken pipi (beef) kaula (strip) to beef jerky, but our version is a bit different. Our pipikaula is seasoned, dried and then grilled to enhance the flavor.

POI | poy | Made of mashed up taro root. It was the main source of starch for Hawaiians. Whether it’s served at room temperature or cold, locals often eat it with a spoonful of lomi salmon or a bite of kālua pig.

POKE | poh-key or poh-kay | Consists of diced raw ahi (yellowfin tuna), sea salt, sesame oil, limu (seaweed) and soy sauce. It’s served as an appetizer or a main dish (see poke bowl), but it should always be served with a cold beer and good times.

POKE BOWL | poh-key bohl | If poke as an appetizer isn’t enough to fill you up, a poke bowl is the next option. It’s a complete meal, consisting of poke served over a bed of rice. It’s great way to curb any size hunger.

SQUID LŪ‘AU | skwid loo-ow | If you ever muster up the courage to try this dish, you won’t be disappointed. Squid lū‘au is a wonderful motley of steamed lū‘au leaves, coconut milk and squid.

TRIPE STEW | try-p stoo | The inner lining of the cow’s stomach in a tomato soup base with small pieces of carrots. Trust us, it tastes way better than it sounds. 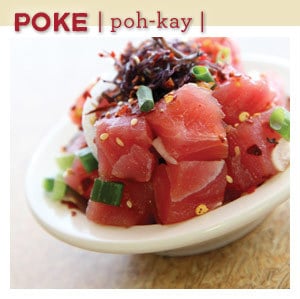 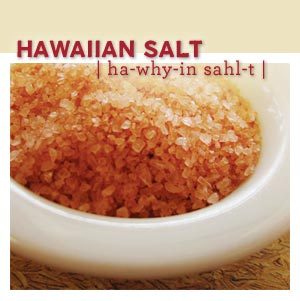 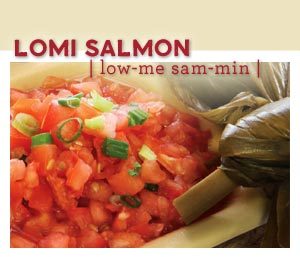 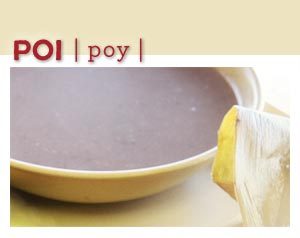 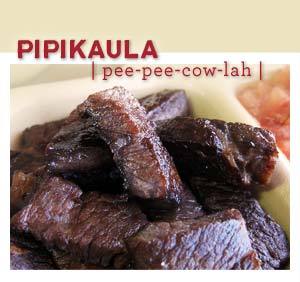